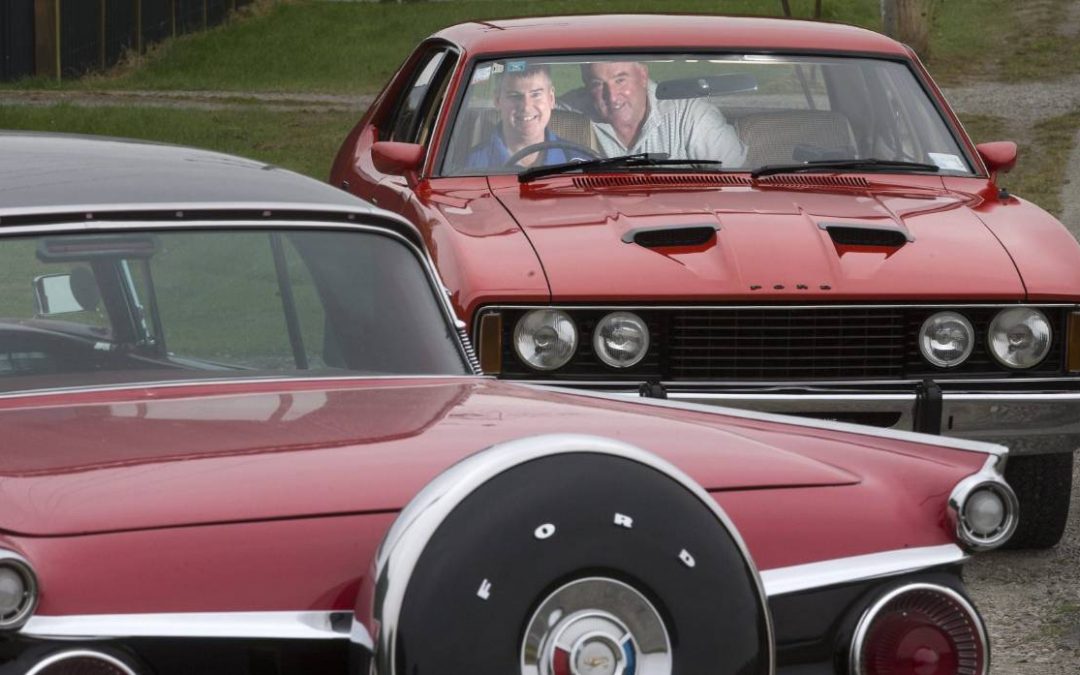 Warren King sits in his 1977 XC Falcon with Grant Mehrtens whose 1959 Ford Galaxy Skyliner is in the foreground ahead of the Falcon Fairlane Car Club nationals in Timaru.

Dozens of Falcons will be among the 70-80 cars in town over Easter for the event which brings together the four South Island branches of Ford collectors – Christchurch, Dunedin, Invercargill and Timaru – for a biennial gathering that rotates between the four centres.

The nationals were last held in Timaru in 2011, before production of the Falcon ceased in 2016 in Australia.

“There hasn’t been any noticeable effect [for Falcon enthusiasts] yet, but in time they will become collectible. For example, right now it’s impossible to find models from the 70s lying around,” said club member Grant Mehrtens.

They will also see a reduction in the availability of parts he explained.

Around 120 people from across the South Island have gathered in Timaru for the event, bringing 70-80 cars dating from the 50s right up to modern models.

Mehrtens predicts most cars on show will be models from the 1970s onwards.

“The most sought after models are the XW and XY Falcons from the late 60s/early 70s that are used to make replicas of the Ford Falcon GTHO, a high spec race car that was considered the world’s fastest four-door production car,” he said.

The GTHO has been credited as the model that launched Australian touring car racing and in 2018 a mint condition model sold for a record $1.1m at auction in Australia.

The cars will be on display in the Ara Institute car park between 10am and 3pm on Saturday and, although only club members can enter their cars, spectators are welcome for a gold coin donation.

Vehicles will be judged by impartial local car experts in a number of categories such as best original vehicle, best interior and best painted panel for prize giving on Sunday night.

The clubs will take to the road for a Poker Run, a common game among car collectors, on Sunday.

Mehrtens explained that competitors will drive to various South Canterbury points of interest collecting playing cards until they have enough for a hand of poker. Whoever has the best hand at the end of the run will take home a prize at Sunday night’s award evening.