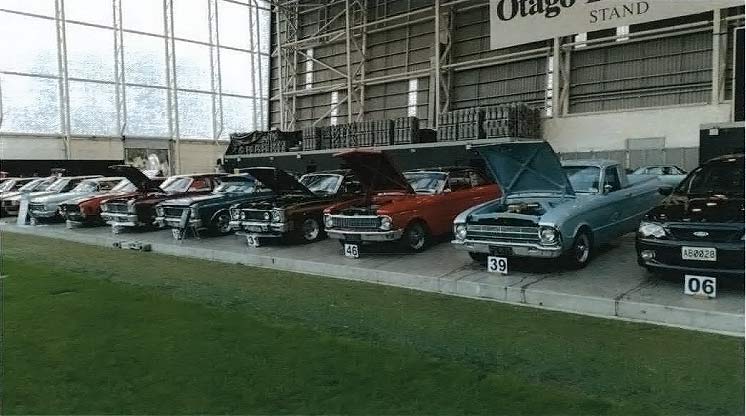 9 cars – along with their owners, met up at Murray’s place on the Friday morning, then headed for Dunedin, with a stop for lunch at Oamaru. In Dunedin all our members were staying at the same place. Once we were all there it was get settled into our lodgings, then off to the Dunedin clubrooms for registration and meet and greet. A well organised evening, with a great meal. This was a precursor to a weekend of great food, great events and great camaraderie.

Unfortunately the heavens opened up on Friday night, which meant all the cars needed some serious drying off before heading to the show.

Nonetheless we all got to the show venue (Forsyth Barr Stadium) and finished off the car preparation. Most of our club then headed off to town. A Cadbury World tour for starters, then we strolled to the Otago Museum for a few hours. We all met up at “The Bog” pub for food/drink, until we were collected by the shuttle van and taken back to the stadium.

After the show it was back to the Holiday Park and a bit of R and R until the evening function. Another super meal. then a band / dancing for those who wished to. Unfortunately the band ran a bit hot and cold, the only disappointing part of the whole weekend.

Sunday – all entrants met at the holiday park, then we toured in convoy to Larnach’s Castle. Chaos reigned as we overtook most of the available parking! Cars were individually parked in front of the castle while photos were taken. We then toured to Outram for BBQ lunch and the grasskhana, although there were complaints from other clubs that not everyone was wearing a seatbelt. I should point out to those whingers, that as we were in a private paddock, road rules don’t apply.

Back to Dunedin, clean up, then back to the venue for the evening meal and prizegiving. Congratulations to our club members who won silverware – Warren King, Evan Cartwright and Steven Peck. In amongst this a few Dunedin club members put on a bit of a show, requiring participation from members from each club. Plenty of hilarity and no one suffered permanent damage!

Monday it was back to the venue for breakfast, drawing of the raffles and fines. Goodbyes were said and we all headed back to Timaru.